Is your boss lowering your wages or taking away your bonuses?

Efling has received suggestions that bosses are responding to wage raises in the new agreements by taking away bonuses, overpayments and various other benefits. Right after the agreements were passed, the hotel manager Árni Valur Sólonsson, for instance, terminated all his staff’s terms of pay. A letter has been sent to the business cartel, SA, requesting a meeting on the matter.

Efling now asks its members to provide information on other companies that may be doing the same. The aim is to collect data and get a better grip on the implementation of the raises promised in the new agreements. The union will respond on the basis of this data.

“Noncompliance with the agreement is a grave issue, and must be seen as unethical in light of the fact that the unions agreed to very moderate raises in the first year of the agreement,” says Viðar Þorsteinsson, director of Efling. “Is it asking too much that people just get their 17 thousand krónur raise?”

Viðar says that the example of Árni Valur’s hotels is not the only one. “It’s saddening to see SA protecting this conduct. It raises many questions, such as on the possibility for terminating the agreement, as the central committee of the confederation of labour, ASÍ, has pointed out in its May 15 statement.” 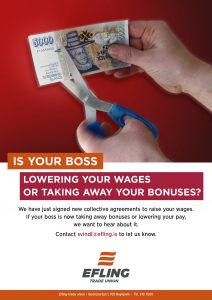